My comic campaign… This comic demonstrates feed the UK. It shows 4 individuals.

and a mother and child.

The comic should demonstrates how by the shopper donating an item of food from his purchases can help people who are in need. This creating the Feed the UK campaign.

I created this comic strip on Bitstrip, The site was easy to navigate but you had to sign up your details. Having Norton security allowed to see whether the site was legitimate, which it was. I signed up using my e-mail and proceeded on to making the comic. Although there were limited settings I managed to find a shop window (which I wanted). I then continued until I had finished to my satisfaction.

Having created the comic allows a different angle of campaigning.

I really like the web. I think I’m an optimist… although there are something’s I worry about…especially after reading about the Kaycee Nicole story. (You can read my thoughts here:  https://franmoorhouse93.wordpress.com/2014/02/19/kaycee-nicole-who/). There’s so much good that has come from the web and social media platforms that would never have got the publicity if the web was not involved.

Recently Steven Sutton a 19 year old teenager fighting ‘incurable’ cancer. Raised over £3million for charity. he did so through Twitter and Facebook.

Stephens aim from his bucket list was to raise £10,000. But after gaining celebrity, general public and news acknowledgment it soon passed the goal to raising over £3 million. Many celebrities and that national public tweeted links to Stephen’s Just Giving page and this is how it all began. He is raising money for the Teenage Cancer Trust.

David Cameron was one to tweet saying: ‘An honour to meet @-StephensStory today – his courage is an inspiration to all of us.’

It is clear that without these tools Stephen would have not gained the support needed even to react £10,000. but with Twitter and Facebook impacting the story, Stephen was able to reach his goal and actually go way above it!!!

I have donated to Stephen story, I think its amazing what he’s doing. If you want to donate, you can at his just giving page here http://www.justgiving.com/Stephen-Sutton-TCT.

I love Twitter… although looking back at my tweets I have found I just moan on Twitter haha, other than my moaning I do love how Twitter is so good for getting up to date news. Twitter enables people to connect with large amounts of people all over the world. My use of twitter has defiantly increased due to my campaign. After creating a separate twitter campaigning account trying to promote awareness and it sort of not working out I reverted back to my personal account. Having 300+ followers I felt I could engage with these more by promoting my campaign here. My followers do vary. I follow people who interest me and also relevant people to my campaign.

For me Twitter is a learning tool, Jeanne Meister of New Learning Playbook sees Twitter as “a great tool for communicating, twitter has a lot of learning tool potential. It can be used by trainers to keep students informed about coursework, reading materials, and provide a place for discussion.”

Twitter uncovers so much. News which had not yet been published can be viewed on twitter (whether it be true or not)

And the fact that you can engage with ‘untouchable’ people, (some celebrities, presidents etc). Allows something that has never been done before. Twitter was used in my campaign as I think it the most current social networking site and it was extremely appropriate for #FEEDTHECHILDRENUK.

You don’t buy friends? so why buy followers?…

The number of Twitter followers you have has become the online version of having the best car in in the car park… people are seen as ‘Twitter famous”!..People think you are more influential if you have more twitter followers. Is this a mark of online success?

You can’t buy friends in real life, so why buy Twitter followers? I think the answer is that Twitter users are looking for a quick fix. Some want the “Twitter Famous” label, some want to embraces the success from others (such as Trisha Paytas a twitter and YouTube blogger). By buying followers can create this ideal. BUT! Fake followers are what you usually buy, these followers spamming your time like can get really annoying! is it really worth it?

I found that Status people’s fake follower check, allowed me to see how many fake followers I had. It’s such a good tool, and you can see who has been buying followers!

So.. how do I get followers without buying them?!

Getting loads of  followers overnight it not going happen. Having success with Twitter is all about engagement. You need to actively engage with other users. this is where following stems from. I have noticed another way to gain followers (like friends) is a common subject. If you have a common subject and can relate to each other people will follow you. They want to know what you have to say.

My TOP Tips For Gaining Followers…

Bloggers played a key part in the Egyptian Revolution. The publication of opinion by a person was very difficult due to high cost, before the introduction of blogs. The platform of blogs and blogging allowed the ‘average’ person to become a journalist via the web (Shirky 2009). Technorati (2011) currently states it is tracking over 112.8 million blogs. By blogging you aim to express your/people’s opinions about everyday life. Egyptian activist were the first online activist to start blogging about Mubarak’s Regime. The digital activists have scooped blogs as a platform to achieve their goals/campaign. Gemyhood an Egyptian activist says that protests began on the Internet in 2005, “but our work snowballed, and the technology became more advanced, so that now every citizen has become a blogger.” Through past failings of protests, the bloggers believed the experience and knowledge resulted in the success of the Egyptian revolution 2011 (Gemyhood 2011).The collective identity in cyberspace appeared to reach a climax for Egyptians worldwide instantaneously after the announcement of Mubarak’s resignation.

In many political campaigns including the resignation of Mubarak, it was found that bloggers and readers could find numerous points of view that were not available in the big media reports such as CNN or Middle East news channels. For example eyewitness reports that were not show on CNN during the protest (Kaye and Johnson 2010). Blog readers are free to publish their opinion and views without it being censored by policies, advertisers or political constraints. They provide a sort of ‘community’ allowing people to communicate in different geographical areas, providing insight and awareness other from traditional news and media that on many occasions is tainted (Earl and Kimport 2011). This case of corruption I also found on Facebook.

In my opinion Google is the best search engine. I have tired others but found that Google really gives to the best options and delivers the most relevant information that you search for. I also like and use a lot of their other products. I use;
Google maps and Google maps for phone.
G-mail
Google drive
Good calander
Google translate
Google documents and Google scholar

I find all of these products are easy to use and extremely helpful in every day life and would defiantly advise Google scholar and Google documents for anyone in education, as you can access books, articles and studies easily.
As a part time job I do TA supply in schools, so when I need to get to a new place I will AWAYS use Google maps for phone. It now even has a navigation system. for me this is brilliant as I don’t own a satnav, my phone is my satnav!

The appearance of my blog.

I wanted a blog that was easy to ready but also simple, in the sense that it is not all cluttered with bright colours and distracting texts. I feel my blog portrays this.

I embedded Twitter and Instagram to the blog. By embedding other platforms to the blog allows extension to other social media tools and platform. 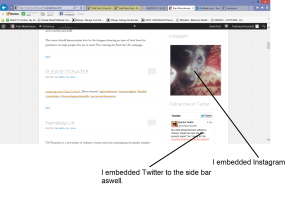 UK Feminista is a movement of ordinary women and men campaigning for gender equality.

This campaign is worldwide and supports women and men to campaign for equal.
Even though there are been laws, legislation, polies and attitude changes gender inequality still happen… and it is rife in the UK.

Feminista UK “believe that political, economic and social equality between women and men is possible – and it is a world that will be better for all.”

The need for ordinary women and men to stand up and be counted is extremely important. At the end of the day we create the world we cant to live in and inequalities need to be abolished.

The aim of Feminista UK is to inspire and enable men and women to stand up and be counted for gender equality.

Inequalities are apparent, Feminista UK report findings that I was shocked by. this can be view on their facts and statistic page.

Attitudes, work, parliament, violence, child care and employment are just some of the themes that show inequalities in the UK.

Without the support and campaigning from Feminista UK  inequalities have reduced. this campaign allows men and women to like equal lives.

I watched an interesting documentary by Feminista UK it was about a group of documentary makers following the feminista team (last summer). It shows an inspirational glimpse of  feminism currently being witnessed across the UK. Watch the film here: http://ukfeminista.org.uk/about/the-documentary/.

People use Facebook and Twitter to connect with large amounts of people all over the world. Activitst also use these social networking sites as a platform for their cause. In the case of the Egypt revolution generating a voice for the Egyptians that wanted Mubarak removed from power. A considerable amount of the early news was posted on Twitter this bridged the gap between Egypt and the rest of the world (Lotan et al, 2011).

A Facebook page that was extremely active during the protests was the ‘‘We are All Khaled Said’’ page on Facebook (Baker,2011; Khamis & Vaughn, 2011). Activists created this page after an innocent man was tortured and killed by security forces. The Facebook page enabled 70,000+ protesters to coordinate a time, date and place for the protest. Khamis and Vaughan (2011) suggest that the activists were able to bypass traditional news reports by using these social media tools. Earl and Kimport (2011) state that by doing this they were able to give ‘true’ representation for the international community.